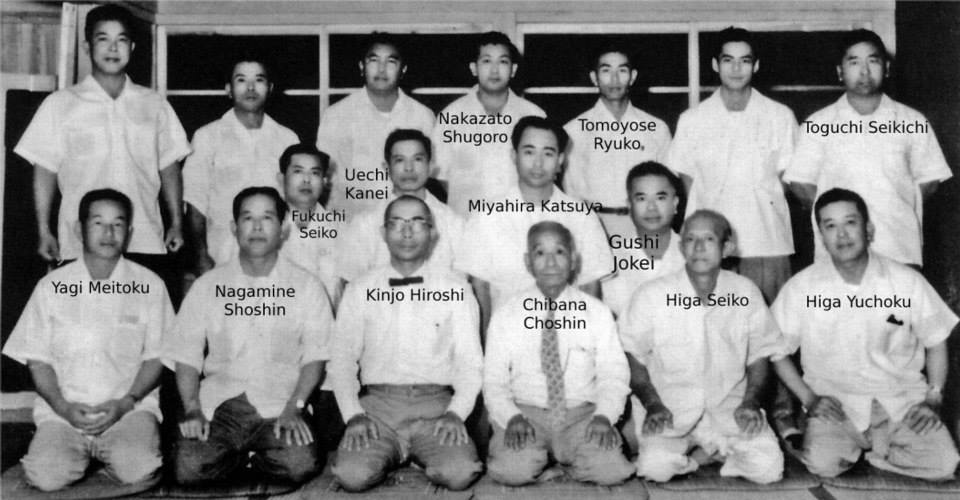 Yamabayshi Shorin ryu karate flows from the Shaolin ch’uan 少林拳 streams of Chinese wushu and the Ryukyuan martial arts. It is sourced from Matsubayashi ryu, Pine Forest Shorin ryu, but it is distinct from it.

It is also distinct from the karate that I (Jeff Brooks) taught at Northampton Karate, which I opened in 1988 and led until 2009.

Yamabayashi Shorin ryu uses the 18 traditional kata of Matsubayashi ryu.  The way we use the kata – the body mechanics, energy transmission techniques, mental conditioning, and applications – is distinct.

Kyan Chotoku with his students

Our kata – forms or movement sequences – teach practical defensive skills. The other benefits of kata practice: fitness, flexibility, focus and flow among others, come from this training.

Practical experience, through law enforcement and elsewhere, is a proving ground for effective skills. This was so for Police Chief Shoshin Nagamine founder of Matusubayashi Shorin Ryu, as it has been for us.

In 2017 I formed Mountain Karate Dojo, in Saluda, NC, where we practice Yamabayashi Shorin ryu – Mountain Forest style karate. Our style is called Yamabayashi ryu because our dojo is in a region of mountains and forests; their strength, stability, endurance, adaptability, vitality, variety and resilience inspire us. 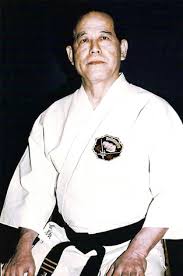 We are a part of a global collaboration of martial artists who are preserving the vitality of traditional styles, by going beyond the artificial restrictions of big organizations, and deeper into training, research and exploration.

An artificial limit is placed on martial arts when practitioners, even able and well-intentioned ones, feeling the need to build a reputation, build an organization, retain and recruit members, maintain a personal image and define a brand positioning for their school or style, and so shut out the novelty, unpredictability, and risk-taking which are necessary to successfully explore, test, innovate, and create a living martial art.

Old patterns, best guesses, or blind acceptance of dogmatic authority will not solve the issues of training, skill acquisition, maturity or personal freedom. Yamabayashi Shorin Ryu is relevant to the urgent challenges we all face: in self-defense, fitness, health, focus, insight and character. It contributes to deeper fulfillment in sports and academics for students, and in the personal, professional, family and working life of all participants.

We appreciate our legacy. We build on the accumulated knowledge of the past. We use it and challenge ourselves.

This is the same approach taken by the Okinawans who continually refreshed their style and deepened their knowledge over the centuries.

Yamabayashi Shorin ryu is exhilarating.  It is challenging. It is flexible. People with diverse interests, abilities and aspirations benefit.

Sensei Shoshin Nagamine’s generation, growing up in the 1920’s and 30s, learned these kata from Kyan Sensei and others.

By the time Shoshin Nagamine created what he called the Matsubayashi style, the name of the arts he learned – Ryukyu kempo to-te jutsu – had already changed to karate-do (empty-hand way).

The names reflect the sources:

Ryukyu was the name of the Okinawan Kingdom which was absorbed into Japan in 1879.

Kempo is a Japanese pronunciation of the Chinese words chuan fa – fist knowledge or fighting art.

To-te means Chinese hands which referred to the fighting systems the Okinawans learned when they visited China as distinguished from the indigenous Okinawan styles known as te or hand.

Jutsu is an art, technique or a method.

In pre-modern times on Okinawa, there was no such thing as a ‘civilian.’  Everyone worked – as a farmer or fisherman, trader or artisan.  Military professionals were few, and most were in service at the court.

If there was a threat to a ship, an island, to a village or a community, everyone pitched in to defend it. Everyone was responsible.

Over the years, as the so-called ‘traditional martial arts’ were brought to the modernizing world – to the US, Europe and Japan – there was an emphasis on standardizing and simplifying the arts, so people could learn them in a shorter time and benefit from them. Times have changed. The needs of practitioners, with life-long commitment to training, deepening understanding, and a quest for mastery, have changed as well. Standardization and simplification is not for everyone. Many martial artists want more depth, more vitality and more combative skill.

To encourage a systematic approach we use ranks. These are indicated by belt colors – white, green, brown and black. After black belt there is no change of the color of the belt, except as it naturally turns white over time.

The first ranks include tests of mastery of specific katas and other skills demonstrating speed, power, and contact training.

The white belt ranks are Rokyu and Gokyu

The black belt ranks are Shodan and up.

Yudansha – black belts – are not limited to specific kata.  Black belts are introduced to deeper technique, step by step, using techniques, tactics and insights from all kata. 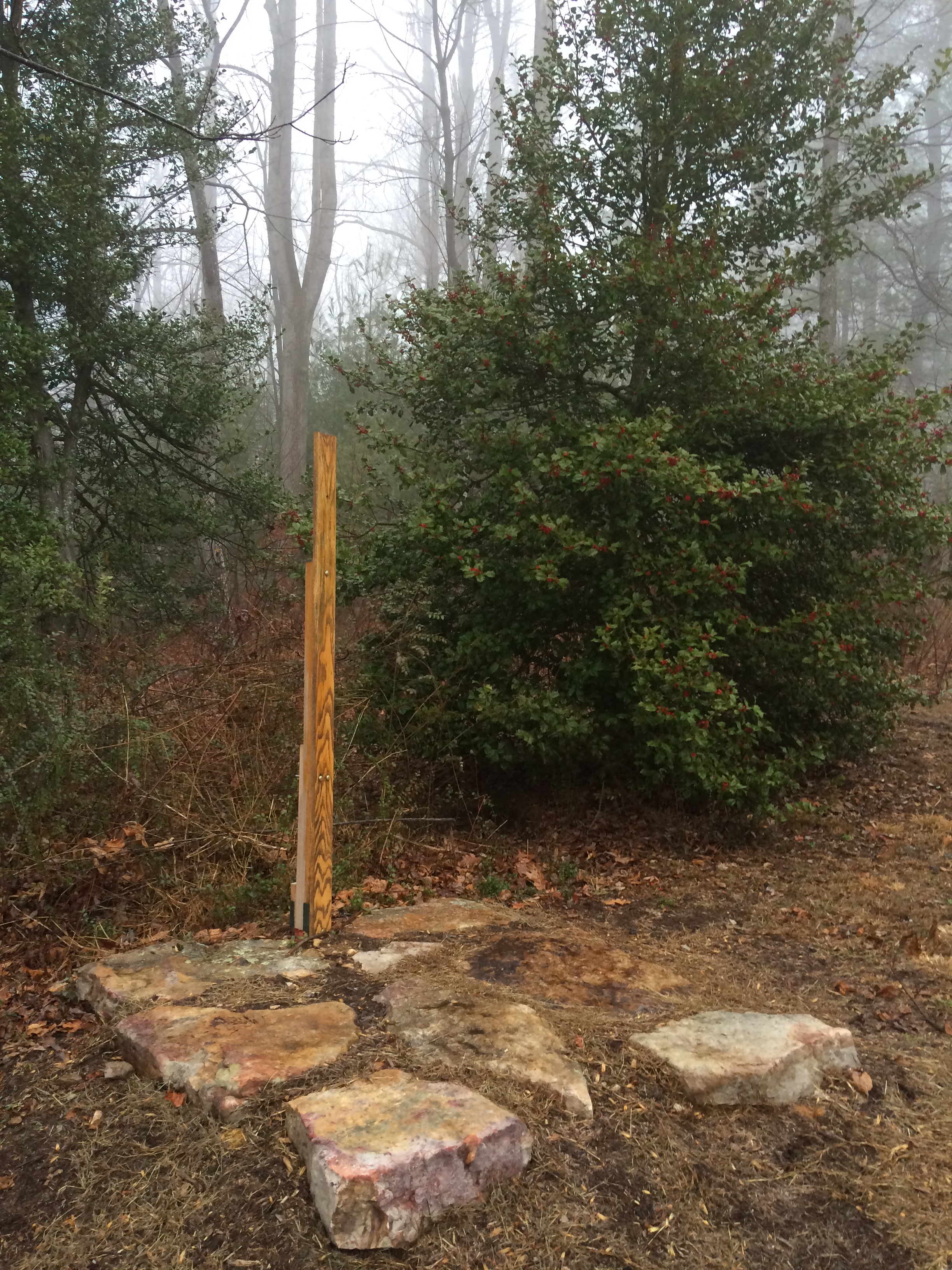 Now, by training with committed practitioners who preserved their ancient style, we have access to a martial art that is both profound and practical. Skill in full-body mechanics, energy flow and transmission, technique application, and other dimensions that made Shorin Ryu and related arts powerful and useful are being practiced in Yamabayashi ryu, here at Mountain Karate. 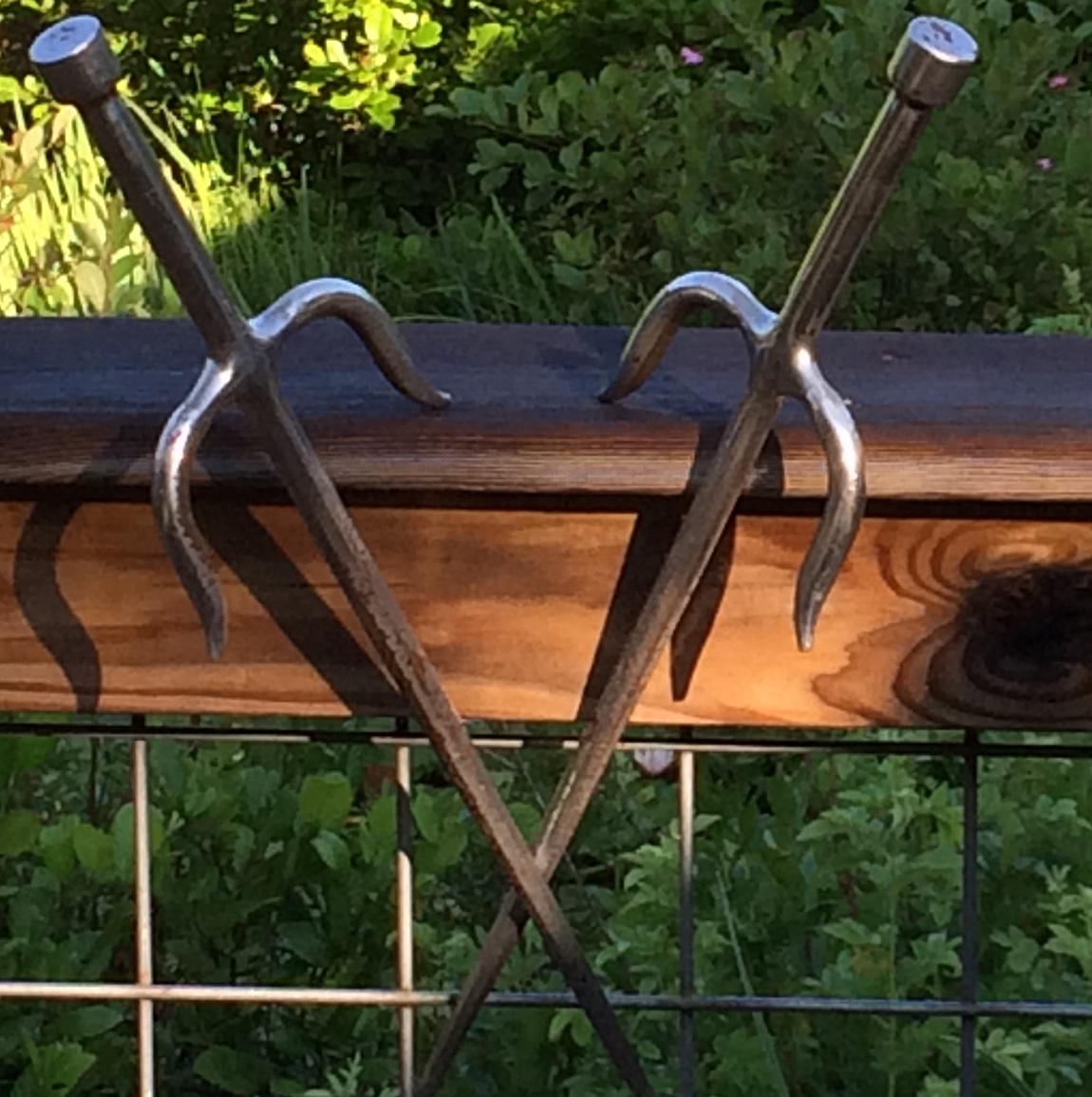 We use a few Japanese words in our classes. These words are used in many traditional dojos on Okinawa and around the world:

Onegaishimasu – I ask something of you

(These are clipped pronunications which are used during training.)