Posted by Jeffrey M. Brooks on July 2, 2018 in Martial Arts Training |No Comments 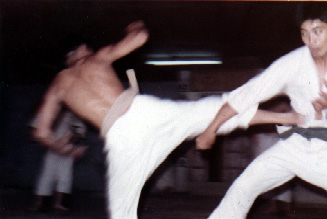 At first we learn techniques. We mature as practitioners by changing the deep structure of our mind and body and bringing those techniques to life.

Whether you are a practitioner of tai chi, aikido, kendo, karate or any other martial art, this is fundamental. It takes consistent practice and clear understanding.

As advanced practitioners we are learning to unify the body. Transforming what we experienced as beginners as the “parts” of the body into a unified system of “arches.”

Like arches in architecture, experiencing the body in this way allows incoming pressure to be distributed over the entire structure of the body, from head to toe, so that the perception of the opponent’s incoming force is not localized at the point of contact, but sensed by the entire body. This allows an immediate adjustment in response, instead of a delayed or fragmented reaction.

The change in the way we experience the structure of our body from beginner to advanced is in a way analogous to the advance from classical Greek to Roman architectural engineering.

The Greeks created large structures by using columns for vertical support, and spanning the columns with lintels or cross pieces.

The amount of material needed to support a given load or to enclose a given amount of space was high. The load limit of this structure – the amount of weight it could support – depended upon the compression strength of the material the columns were made of. 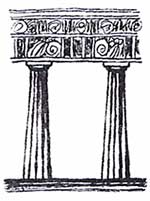 A stone column is strong when force is applied from the top down. Under shearing force – stress from the side – they are not so strong.

Force applied to this kind of arch at an angle stresses the joint between the vertical and horizontal, the weakest part, destabilizing the structure.
The Roman arch can support a vertical load using much less material than the Greek method, because the Roman design distributes the load over the entire arch.

Roman arches are more stable, too, because they will be stable under stress from several directions, not just in the vertical.

As beginner martial artists we learn by dividing the body into parts and analyzing what to do with each part – move the foot like this, turn that way, keep shoulders down, keep elbows in, the wrist like this, the ankle like that… etc. This is a useful and necessary stage of the process of learning to move skillfully.

It is similar to learning the alphabet before learning to read. But if we get stuck in this mode, if we take the body to be a collection of “parts,” we will never appreciate the body’s coherence or discover its potential.

Take the “horse stance”, for example.  We can see many practitioners use the “Greek” approach to load bearing: two legs as the vertical supports, the pelvis spanning them, joined at the hips. If our body feels like that, it will function in a way that is weaker than it could. The limits of that stance are in the muscles of the calves and quadriceps, and the strength of the hip, knee and ankle joints.

You can transform it into a stance that is many times stronger, however, if you know what to do. You do not have to do years of muscle building or skill training to effect the transformation – you just have to think differently about what you are trying to achieve in your stance.

To do this we use the “Roman” approach to the structure of the stance.

Instead of two legs as posts and the pelvis as a spanner, think of the legs – from foot up through your hara (lower abdomen) to the other foot – as a single arch. Bring the muscles into a fully arched contraction by continuing the form of the arch through the floor – make a full circle with your muscles, pulling the feet through the floor toward each other, using the pelvis like the keystone in the arch.

The butt muscles, inner thigh adductors, the arches of the feet, the lower abdominals, the lower back muscles all are part of this unified contraction or coherent structure which creates the arch to support you in this stance.

There is no need to maintain high tension or rigidity in the body to create arches, but it helps to get the feeling when you start to discover them. Once you have the leg arch try this: extend your arms in a “square punch and chambered fist” position. (I put that in quotes because that hand position has numerous applications that have nothing to do with a square punch or a chambered fist, but it is a convenient label for the arm position.) 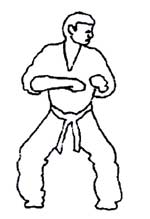 Now make your arms into an “arch:” Get the feeling that instead of two separate levers hanging from your shoulders you have a single unified system of energy running from your fist, down the arm, across your back (separate the shoulder blades drawing the shoulders forward to get this feeling) and continue the feeling of unbroken energy flow around to your other fist. That is an arm arch. 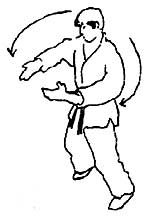 Extend your spine in an erect vertical chain, feeling the small spaces between the vertebrae, like the “pulling up” of a ballet dancer, yogi or a Marine at attention. That is a spine arch.

When you start to make the body into arches, it is a conscious, labor-intensive process. Just like learning basic techniques when you started. But gradually it becomes natural.

Instead of be a static, tight feeling, it becomes more and more dynamic and whip-like. A feeling more like the resilience of bamboo than the rigidity of stone.

Instead of having the body divided into three arches, the entire body, little by little, evolves and performs as an integrated dynamic system of numerous arches, with flows of energy moving as necessary.

This is useful work for advanced martial artists in any style. Using push hands and a variety of kata (from whipping ones to rooted ones) we unify the body in space (unifying the parts of the body) and time (unifying movement sequences.)

This principle of dynamic arches is part of a system of perception, movement and  body architecture that was fundamental to pre-modern karate and other martial arts.

The whole new level of speed and power it gives you is yours. You have it now.

Accessing it is a huge step to mastering your art.

This site uses Akismet to reduce spam. Learn how your comment data is processed.